Ministry Declares Health Emergency in Yemen: Malaria and Dengue Fever on the Rise
In the Shadows of War

On Tuesday, Yemen’s Houthi rebels-controlled health ministry declared a health emergency in and around the Hodeida directorate. According to information obtained by JusticeNow!, so far 116,522 malaria infections, 500,000 suspected cases and 23,000 cases of dengue fever have been recorded. 51 people have already died as a result.

On Tuesday, the Yemeni Ministry of Health in Sana’a declared “a health emergency in order to control dengue fever, malaria and mosquito vectors”, according to information obtained by JusticeNow!. According to the Houthi rebel-controlled ministry in the north-west of the country, recent weeks have witnessed a wave of infections, most notably in Hodeida on the Red Sea coast, the country’s main port, through which almost all food imports and relief supplies enter the war-torn country.

“116,522 confirmed cases of malaria, 500,000 suspected cases, and about 23,000 cases of dengue fever”, numbers JusticeNow! learned from the Ministry of Health spokesman, Dr. Yousef Alhadri. So far, 51 people have died from the consequences of both diseases according to Alhadri.

On Wednesday, a delegation led by Minister of Health, Dr. Taha al-Mutawakel, visited Hodeida in order to coordinate necessary steps. Medical teams from the capital Sana’a have already been dispatched to the Hodeida Directorate, according to a Yemeni journalist.

As the reasons for the recent wave of infections, the Ministry invokes the heavy onset of the “rainy season and the deterioration of infrastructure as a result of the aggression”—that is, the four and a half years of war of aggression led by Saudi Arabia and the United Arab Emirates against Yemen.

On social media, the well-known Yemeni journalist Baseem Al-Jenani shows the faces behind the death toll.

“Allen” died of dengue fever in the surgical directorate this morning. 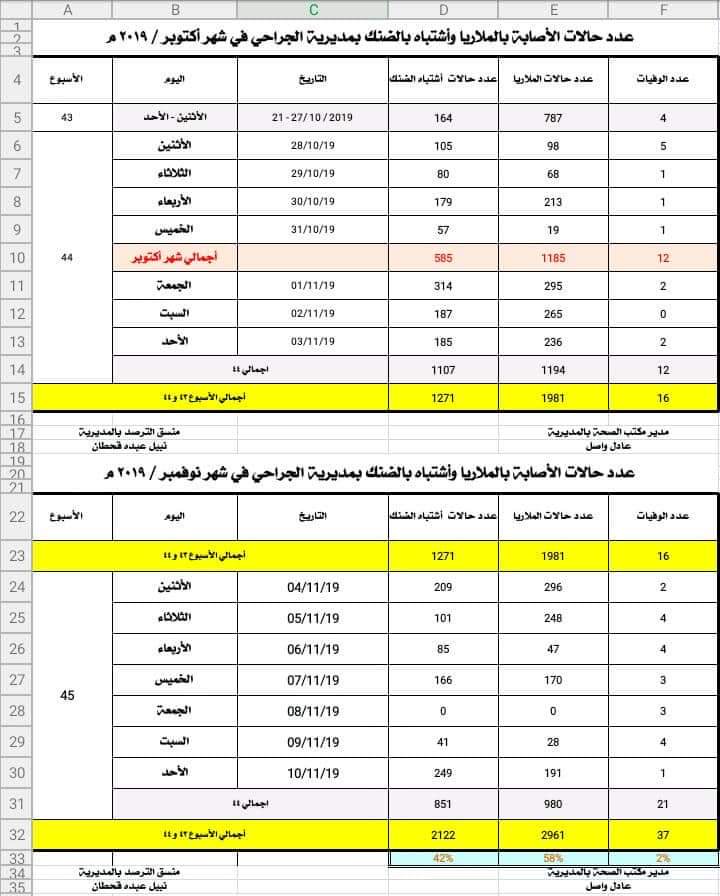 Casualties statistics on malaria and dengue in Hodeida Directorate from 27 October to 11 November. By بسيم الجناني #اليمن, Twitter.

On Monday, Al-Jenani posted a screenshot of an Excel spreadsheet by a local authority listing the malaria and dengue infections in the Hodeida Directorate, as well as the accumulated death toll, from October 27 to November 11 (the table has been translated for this article and could thus be comprehended). According to Al-Jenani’s post, “the number of deaths exceeded 50 a week ago and the epidemic continues to kill dozens”, reaffirming the number provided by the Yemen Story website (53) and the Houthi Ministry of Health’s data (51).

“Most diseases and epidemics are transmitted from the areas under [Saudi and Emirates] occupation”, to which the Houthis had no access, the Ministry of Health told JusticeNow!. This is in line with local media reports from Monday, according to which another malaria hotspot is located in the southwest in Ta’iz, which is under the control of the Saudi-Emirates Coalition. The Coalition would not care about the garbage collection in the city, which causes the garbage to pile up in the streets, thus dramatically exacerbating the spread of epidemics.

Epidemics as a weapon of war

The epicenter of the current wave of infection lies in Hodeida, whose significance for the literal survival of 29 million people in Yemen can hardly be overstated— the port city is rightly considered the “lifeline of Yemen”. Hodeida is mandated by the Stockholm Agreement, a peace agreement negotiated in the Swedish capital in December 2018, which provided for the complete demilitarization of the Hodeida region.

However, the internationally renowned Yemeni journalist Hussain Albukhaiti reported in early October that the Saudi-Emirates “Coalition conducted strikes on a truck in #Hodeidah”, killing at least two civilians: “This is a clear breach of [the Stockholm Agreement]”. Other reports of similar coalition airstrikes in the Hodeida region circulated on social networks, as well as in the international press.

And while there are credible reports that the Houthi rebels have indeed withdrawn from Hodeida and two other port cities by the summer of 2019, journalist Albukhaiti disagrees with claims by the UAE who were in charge of the operations in Hodeida: “#UAE has NOT withdrawn from #Yemen”.

An immediate and complete demilitarization of the entire Hodeida region is vital to counter the epidemics that are currently emerging. With ongoing combat, it is utterly impossible to bring the deadly diseases under control.

In Yemen, the biggest cholera epidemic in human history is crippling the population as well as a no less historical famine. The most recent waves of malaria and dengue should therefore not be viewed in isolation, but must be seen in the context of the genocidal nature of this illegal war: epidemics are by no means “collateral damage” in the war against the Houthi rebels, but the Saudi Emirates coalition is using cholera, malaria and, first and foremost, famine deliberately as weapons of war in order to break the Yemeni resistance.

Farms, food factories and marketplaces are being bombarded by intention to escalate the historic famine. Water and sanitation plants as well as hospitals are being destroyed to trigger or exacerbate epidemics.

Due to the war, more than half of all medical facilities in the country are out of service. Just last week, Doctors Without Borders reported that one of their hospitals in Mocha on the Red Sea was destroyed and had to be shut down after a coalition attack, although—or because?—the exact location of the facility has been repeatedly communicated to the Coalition. The clinic’s pharmacy as well as a large warehouse of medical supplies have been destroyed too. Treatment in order to contain dengue and malaria infections will be massively hampered as a result.

“Hundreds of thousands of people along the western coast who need emergency assistance”, Ms. Lise Grande, the UN Humanitarian Coordinator for Yemen, comments on the Mocha attacks, “won’t get the help they need because of these strikes.”

This piece was published in German on JusticeNow!. It was translated to English by Jakob Reimann and edited by Jeremy Hammond of the US website Foreign Policy Journal where it was published first – connect critical journalism worldwide. 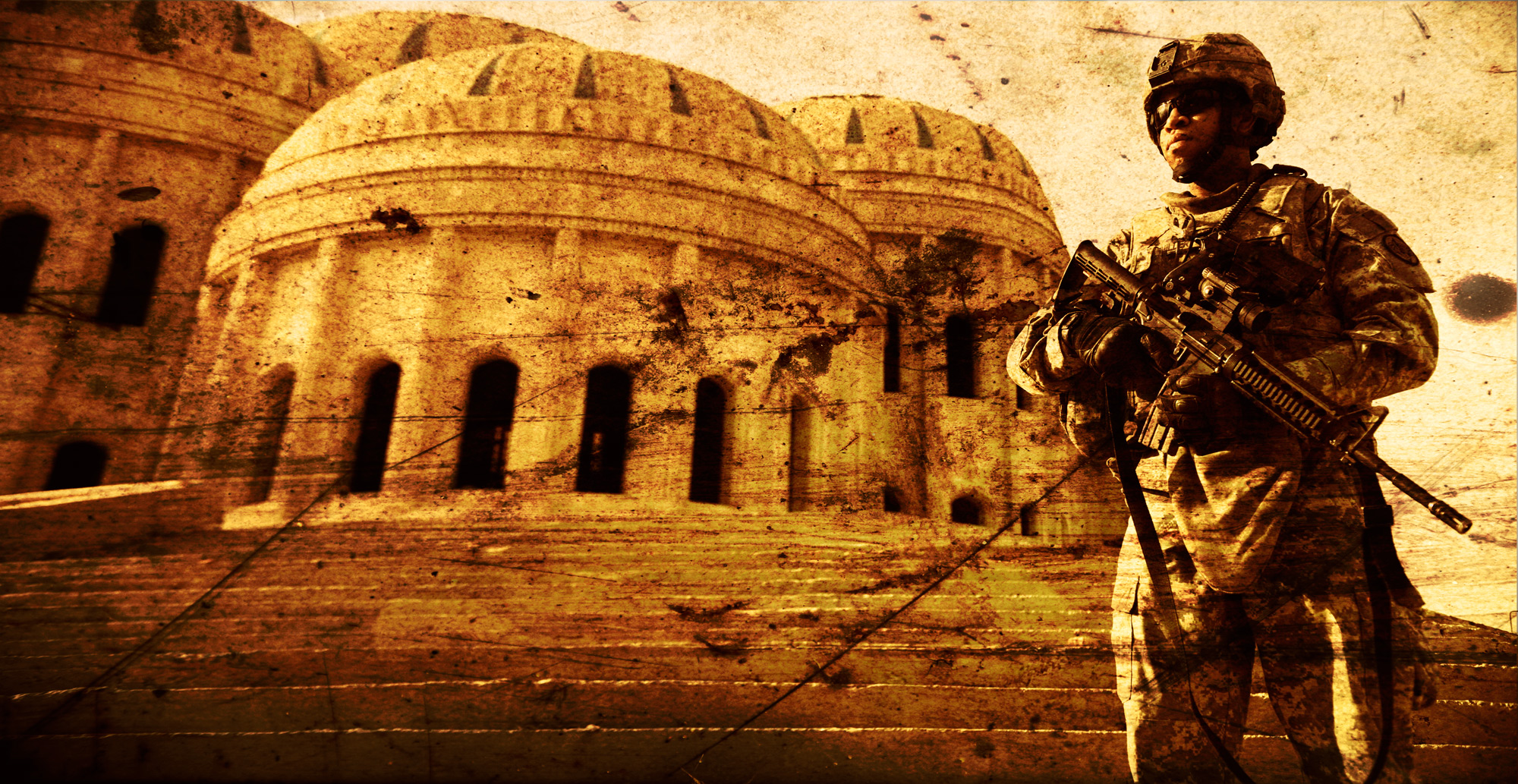