Throughout the war on terror, the U.S. shattered norms on unmanned execution. Now the technology is spreading throughout the region. And the rising demand is essentially served only by one actor: China.

The last great revolution on the world’s battlefields began with the advent of the drone era.

Particularly in the Middle East, the drone became the symbol of the U.S. empire operating in a legal vacuum. In the first decade and a half of the “War on Terror,” the U.S. still had a virtual monopoly on the risk-free execution from thousands of meters above – but once the genie is out of the bottle, every attempt to squeeze it back in is notoriously doomed to failure.

And so, quickly other countries in the region aspired after the financially – and politically – cheap execution by drone. The number of armies with their own drone fleet is growing rapidly. A multi-billion-dollar market with astronomical growth rates opened up – demand that’s essentially served only by one actor: China.

The U.S. has squandered its lead

The appearance of the Rainbow CH-4 – the driving force of Chinese combat drones – is almost identical to the notorious Reaper drone of the U.S. arms manufacturer General Atomics. While the CH-4 lags behind the Reaper in most performance parameters, it can keep up with or even outperform its competitor in some of them. Also, the CH-4’s weaponry, the AKD-10 warhead, is almost identical to the Reaper’s Hellfire missiles.

The striking similarity follows a strategy of Chinese engineering well-known from cell phones or cars: the look of a world-famous Western branded product is copied with an inferior but sufficiently good quality compared to that of the original – but at significantly less cost. Chinese drones are 50 to 75 percent cheaper than the originals from the U.S.

A late 2015 article published in the Asia Times suggests that this copying of U.S. technology is likely rooted in Beijing’s data theft. According to records by world-famous NSA whistleblower Edward Snowden, by 2010 alone “Chinese hackers had conducted more than 30,000 cyber attacks” on Pentagon computer networks and other U.S. military agencies in order to “exfiltrate [data on] sensitive military technology.” Although there is no final proof that data on drones were skimmed off too, Asia Times quotes then NSA director Gen. Keith Alexander, who suggests that it is highly likely that the Reaper blueprints were part of the Chinese data hack, while military experts and analysts largely share this view.

With the latest model – the CH-7, which is still in the development phase – China could possibly pull ahead the U.S. for the first time, military journal Defense One explains. The CH-7 “will be the sole option for buyers wanting to field stealth combat drones,” it predicts. “The United States had a decade-plus head start on [drone] technology,” says military expert Paul Scharre, “and has unfortunately squandered that lead.”

For a long time, it was only the United States, the United Kingdom and Israel that had combat drones and used them to execute alleged terrorists – something that has changed dramatically in recent years.

Meanwhile, the number of countries with combat drones has swelled to at least 29, as research organization New America identifies. And 10 countries have demonstrably used them to kill suspected enemies; in addition to the three mentioned, there is Iran, Azerbaijan, the UAE, as well as Nigeria, Iraq, Pakistan, and Turkey (the last four countries drone-killed people on their own soil).

Historically, Israel is the largest drone exporter, with a market share of over 60 percent in the last three decades. More recently, from 2008-2017, China exported a total of 88 drones to at least 12 countries, ranking third among the world’s drone exporters behind the United States (351) and Israel (186).

However, while the vast majority of U.S. and Israeli exports are made up of unarmed reconnaissance drones, China’s sales focus on armed drones. During the mentioned period, China exported 68 combat drones, putting it ahead of the U.S. (62) and Israel (56). Foreign Policy thus recently titled rightly: “China Has Already Won the Drone Wars.”

All of the armed forces of the Chinese military have large fleets of various drones, but Beijing has used them so far only for disaster relief, surveillance of domestic critics, and military reconnaissance – not to kill. (In 2013, Beijing considered executing by drone a Myanmar drug baron wanted in the murders of 13 Chinese sailors, but eventually caught and tried him.)

Rather, Beijing appears to be establishing a norm permanently prohibiting lethal drone strikes in East and South Asia. However, this no-shoot dogma does not prevent the Chinese arms industry from exporting their drones to states that are patently using them for killing elsewhere. 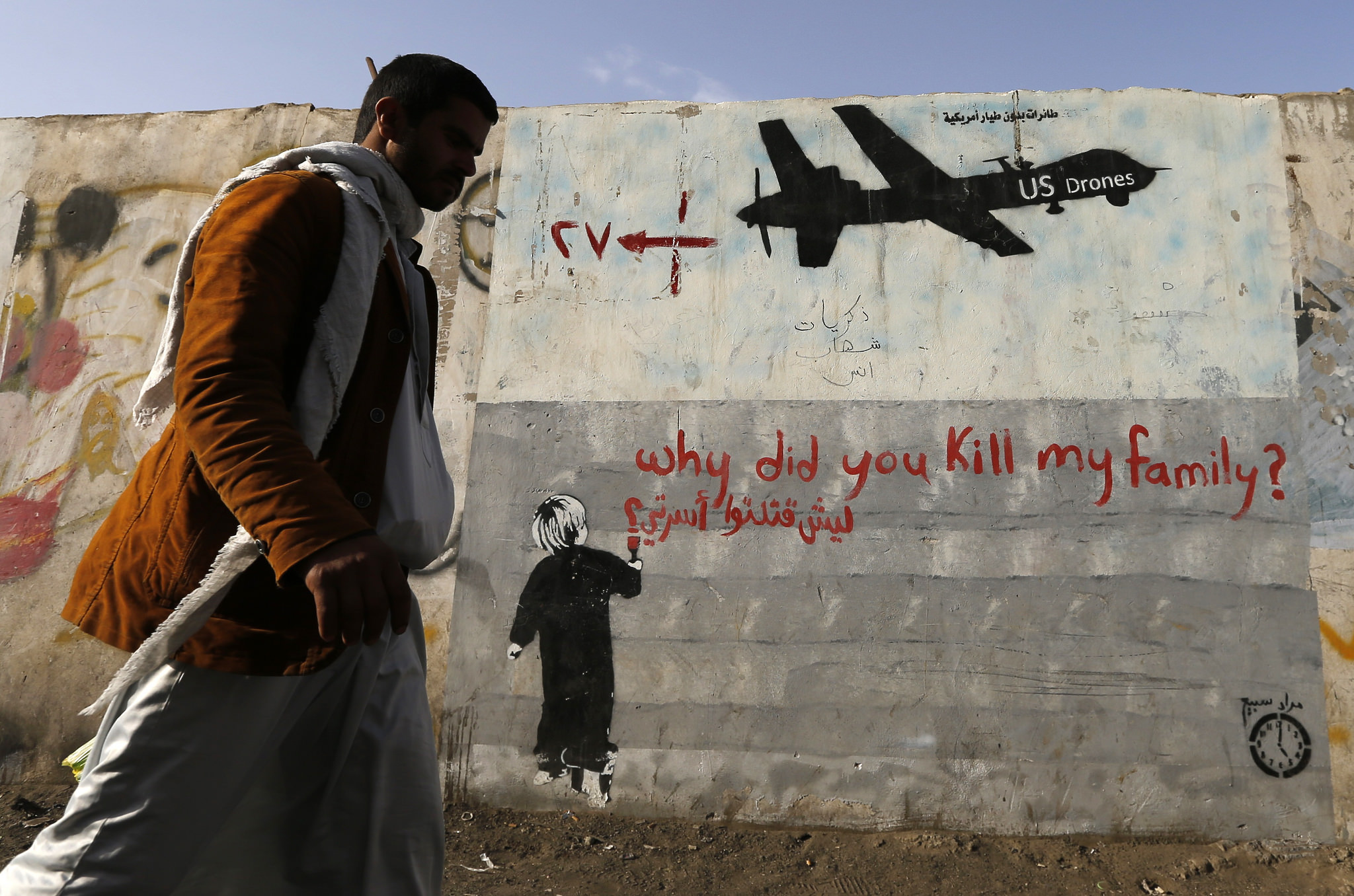 “Why did you kill my family?” a graffiti kid in Sana’a, Yemen, asks the graffiti U.S. drone over his head. By ビッグアップジャパン, Flickr, licensed under CC BY-SA 2.0.

While the Pentagon continues to this day to deliver armed Reaper drones only to the UK, France, and Italy, purchasers of Chinese combat drones, according to Chinese manufacturers, include Algeria, Egypt, Ethiopia, Iraq, Jordan, Myanmar, Nigeria, Pakistan, Saudi Arabia, Turkmenistan, the UAE, and Zambia. So far, the three largest buyers of Chinese drones are Pakistan (with a share of 25 percent) as well as Egypt and Myanmar (with 23 and 13 percent, respectively). Several of Beijing’s buyers are close strategic U.S. allies who have requested the sale of armed drones from Washington to no avail and have thus fallen back on Chinese products.

The U.S. is by far the largest arms exporter and usually sells military equipment to almost every country in the world. According to the SIPRI research institute, the U.S. sold $98 billion worth of weapons to as many as 112 countries in 2007-2017. Hence, on the face of it, it seems rather counterintuitive that it would hand over the lucrative battle drone market to China.

A recent report by the DIA, the Pentagon’s internal intelligence service, deals with this contradiction. “China is a niche provider of armed [drones]” in the Middle East, the report acknowledges, and correctly concludes that “China faces little competition” as it is not a member of international export control regimes. In fact, unlike the U.S. and the European arms-exporting countries, China is not a contracting party to the Missile Technology Control Regime MTRC which strictly regulates the proliferation of combat drones and makes U.S. drone exports to the Middle East more difficult.

In addition to attempts by the Trump administration to amend the MTRC, Trump’s State Department published a new export policy in April 2018: “We will remove barriers to the global [drone] market and avoid ceding export opportunities to competitors where such self-imposed restrictions are unwarranted.”

Since the wording does not specify when restrictions are “unwarranted,” the new policy can be understood as blank approval for future drone exports. De facto, it was also made possible to buy combat drones directly from the manufacturer, without the government as a broker agent. “To date, however, that hasn’t led to any reported sales to the Middle East,” Forbes reported late last year.

So, in contrast to relatively strict regulations on U.S. drone exports, China’s “no questions asked” policy allowed it to quickly gain a foothold in the lucrative Middle East drone market and aggressively expand the course of the proliferation of cheap drones.

State-of-the-art technology perceived as revolutionary always comes with a certain adulation for its possessor. Thus, a recent report by London-based military think tank RUSI concludes that “national prestige and status is the main reason that most states” in the Middle East increasingly acquire drones, as Middle East Eye reports. However, in addition to their value as status symbols, in recent years they are more and more being used strategically on the battlefields of the region, which the RUSI report attributes largely to increased Chinese exports.

And so Chinese drones also recorded their first deaths: Besides fatal deployment by the Nigerian army against Boko Haram, since the end of 2015, the Iraqi military performed more than 260 air strikes against Islamic State targets with Chinese drones. They gained particular infamy on April 22 last year, when the UAE executed the de facto president of Yemen, Saleh Ali al-Sammad, with a Chinese drone, escalating the nearly four-year war in the country: The murdered Al-Sammad was seen as a promoter of the UN-mediated peace process in Yemen, whereas his successor, Mahdi al-Mashat, is an implacable, uncompromising hardliner and provocateur.

Of particular concern is China’s drone policy in Saudi Arabia.

A $ 65 billion economic program clinched between the two countries in spring 2017 includes the construction of a Chinese drone factory in Saudi Arabia – the first of its kind in the region. Initially, the license production of 300 drones was agreed, which represents a massive figure given the 88 drones that China has exported in the last decade altogether.

However, the license drones are not exclusively intended for the Saudi Royal Air Force – Riyadh can explicitly market them to other countries in the region. End-user certificates do not exist for deals with Beijing. In view of the fact that Saudi Arabia, along with supporting various jihadist groups in the region, is a close ally of Al Qaeda in Yemen, it is within the realm of possibility to envision some of these drones end up in terrorist’s hands. Fueled by Beijing’s export policy, the threat scenario of drone-armed jihadists has moved significantly closer.

Research by the Jamestown Foundation shows that we have already entered the era of “unmanned terrorism”. Groups commonly labelled as “terrorists” from Syria, Iraq, and Afghanistan to Gaza, Lebanon, and Yemen are already using mini-drones to drop bombs, grenades, and incendiary devices onto enemy positions or civilian facilities. Further flooding the region with cheap combat drones from China will certainly heave these tactics to the next level in the future.

Since 2001, thousands of people, most of them civilians, have been killed by drone in the so-called “War on Terror,” changing the nature of war in its entirety and exposing civilians in all these undeclared war zones to a permanent threat on their lives. Nobel Peace Prize laureate Barack Obama proved he could always escape punishment and international condemnation even after using drones to turn weddings and funerals into blood baths and mass graves. And so, the desires of local actors to acquire these practical killing tools were aroused, too.

The Chinese leadership is exploiting these developments without compromise and flooding the Middle East with cheap drones. The consequences of this expansionary policy cannot be foreseen.

This piece was originally published in German on NachDenkSeiten. It was translated to English by Jakob Reimann and edited by Peter Certo of the US website Foreign Policy In Focus where it first appeared. Many thanks to everyony involved for their great job – connect critical journalism worldwide!

You like the article? Then please support our work by telling friends, family, and foes about this article
or follow JusticeNow! on