The Latest Gaza Massacre: ”There is no better life but for dead people.“ 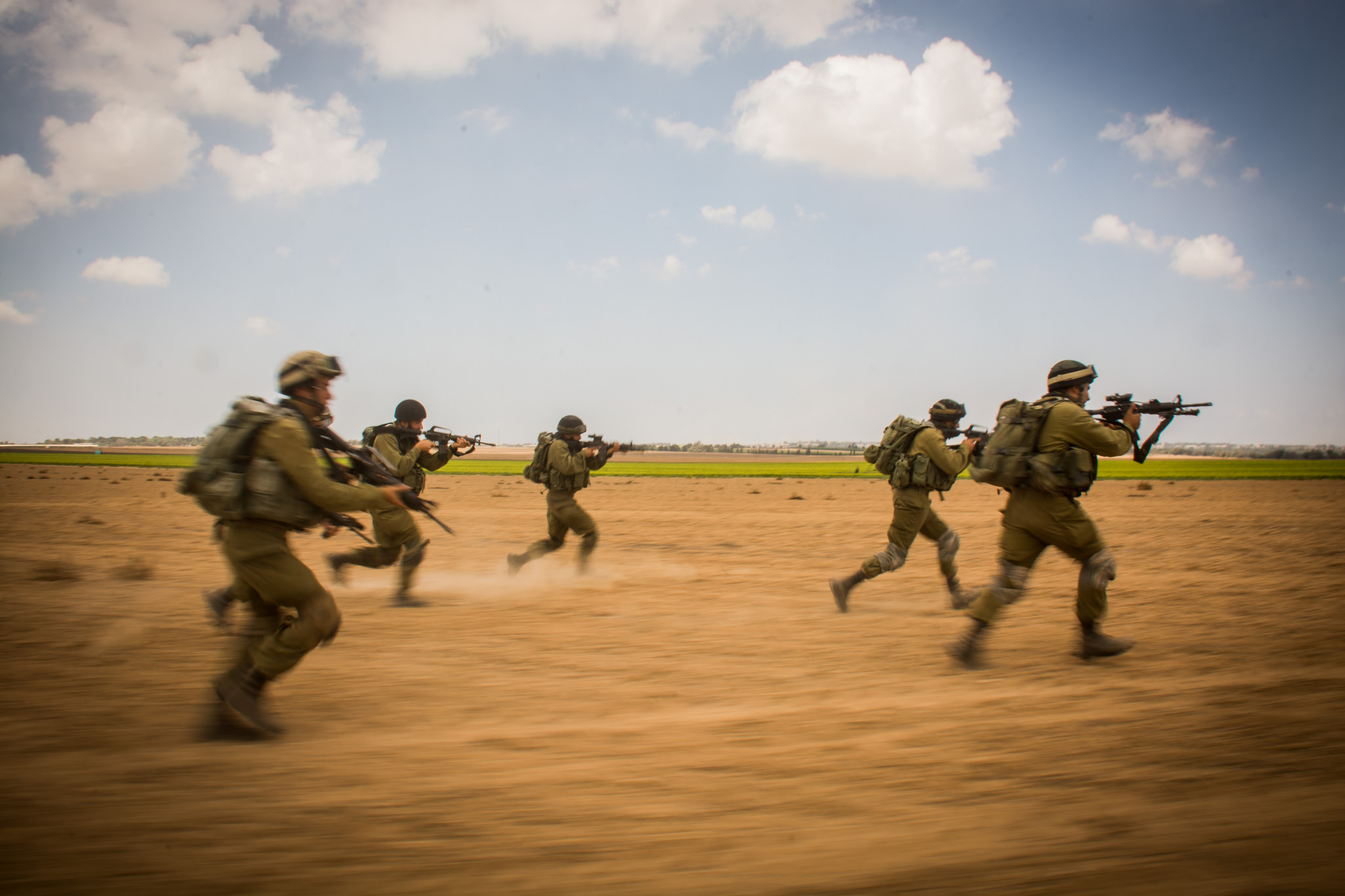 Over the past month, Israel has slaughtered almost 50 unarmed Palestinians in the Gaza Strip protesting the theft of their land and the oppression under which they live. To grasp the recent events it is crucial to understand the structural violence inflicted by Israel: its hermetic blockade of the coastal enclave and the periodic wars against the Palestinian economy and the Gaza Strip and its population in their entirety.

Friday for Christians, the beginning of Passover for Jews, the ‘Land Day’ for Palestinians: On March 30, a bloodshed descended upon Gaza which the Mediterranean enclave had not experienced since the end of the last major war in the summer of 2014. At the kick-off of a multi-weeks protest campaign against the longest military occupation in the world, 18 people were killed by Israeli security forces, hundreds more seriously injured. The total number has risen to 45 people killed and more than 6,000 wounded in the last five weeks of protests.

Gaza will soon be uninhabitable

In 2015, the United Nations announced in a ground-breaking report that with ongoing developments the Gaza Strip would literally become uninhabitable by 2020. After Israel withdrew from Gaza in 2005, the following year Hamas won the parliamentary elections. Israel established a comprehensive blockade that hermetically sealed off the air, sea and land routes of the tiny stretch of coastline.

For a while now, the Egyptian government has been cooperating with the Israeli government in the crippling blockade. As a result, the local economy finally collapsed. With over 40 per cent, Gaza has the highest unemployment rate in the world. All movement of goods is controlled and maximally limited by the Israeli government. So is any movement of persons. The approximately two million inhabitants of the Gaza Strip are literally imprisoned on an area of about one quarter the size of Los Angeles.

Add to this the periodic bombing raids against Gaza. According to the Israeli government’s narrative, they are a response to shelling from within Gaza. The weapons are home-made rockets that – luckily! – cause property damage only in exceptional cases, let alone result in human casualties.

Since the end of the Second Intifada in 2005 alone, there have been three full-blown wars in Gaza, in addition to many small and medium-sized operations carried out by the Israeli military. In the 51-day bombing of 2014, 2,251 Palestinians were killed, including 1,462 civilians. More than 11,000 were injured, and more than 200,222 people were rendered homeless by systematic home demolitions. By contrast, 69 Israelis were killed.

Furthermore, there are systematic bombings of civilian targets in Gaza, such as schools, mosques, public squares, as well as residential and hospital buildings. The only airport was destroyed in 2001, and the only power plant was destroyed in 2014 on top of 360 industrial plants and tens of thousands of acres of croplands.

Officially, the Israeli bombing campaigns are aimed at disarming and weakening Hamas, but they should instead be understood as a war against the Palestinian economy and the Gaza Strip and its population in their entirety. 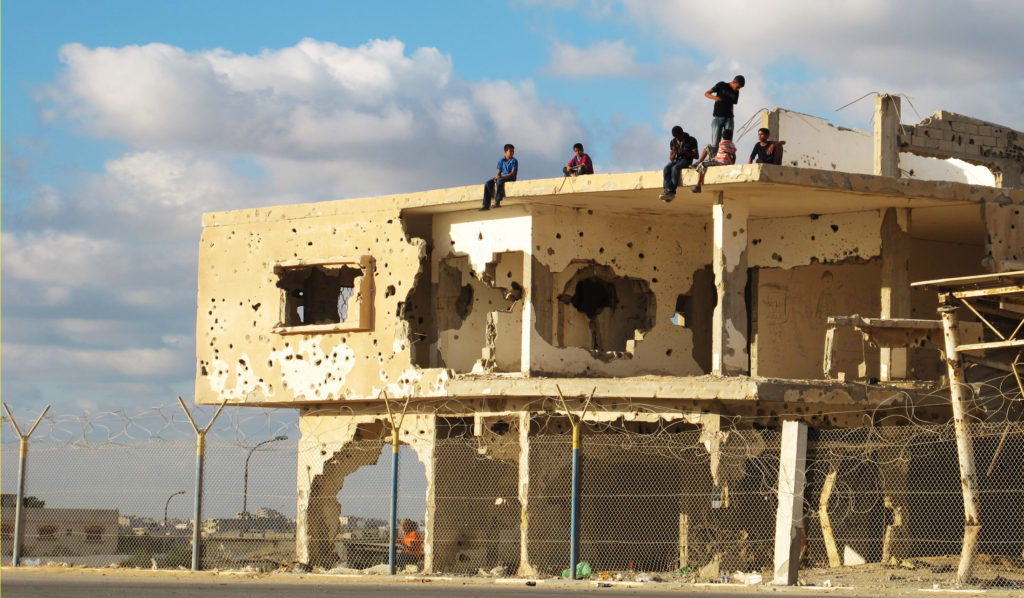 Through the periodic Israeli bombing onslaughts, the Gazan infrastructure is largely destroyed. Tens of thousands of residential homes are pulverized. Gazan kids grow up in a crumbled world. By United Nations Photo, Shareef Sarhan, Flickr, licensed under CC BY-NC-ND 2.0 (edited by JusticeNow!).

Gaza is dominated by Hamas on one side, and the hermetic blockade and periodic wars on the other side. It is crucial to understand this structural violence, this hostile environment that reigns in Gaza because otherwise, it is impossible to grasp the recent events even to the least extent. 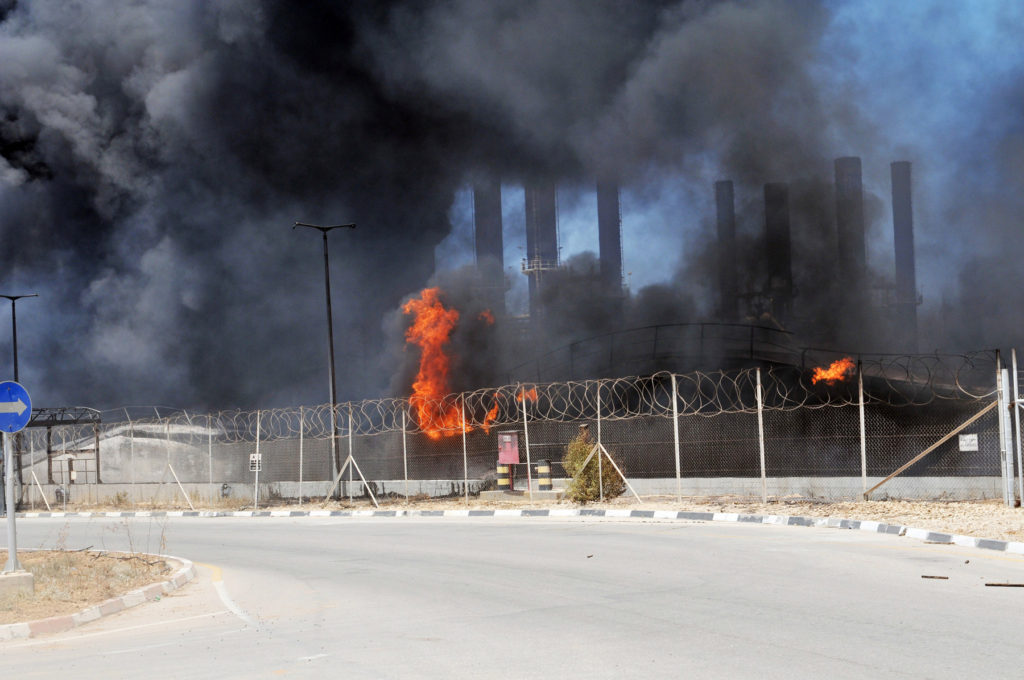 The only power plant in the Gaza Strip was deliberately destroyed by the Israeli Army in 2014. By United Nations Photo, Shareef Sarhan, Flickr, licensed under CC BY-NC-ND 2.0.

In 1976, the Israeli government in Galilee, northern Israel, launched a massive wave of confiscation of Arab lands with the intention of incorporating it into Jewish communities, resulting in a general strike and six people killed by Israeli security forces. With ‘Land Day’ every year on March 30, Palestinians at home and abroad commemorate this historical event and the ongoing daily land grab by the state of Israel.

And so it was in 2018. Hamas and many other organizations called for peaceful demonstrations on ‘Land Day’ in Gaza. Tent camps were set up on the border with Israel, initiating a six-week protest campaign with the aim of bringing the daily suffering of the Gazans to the world consciousness.

The protest will end on May 15, the 70th anniversary of the founding of the state of Israel, mourned by the Palestinians as an equally historic day each year. Because what is one’s Independence Day, is the other’s ‘Nakba’ (Arabic for ‘catastrophe’): the violent expulsion or killing of around 750,000 Palestinians by Jewish militias in 1948.

The protests on 30 March, to which around 30,000 people gathered in Gaza near the border fence to Israel, were largely peaceful and often resembled public festivals, with free food, water and WiFi. However, larger groups of people also moved closer to the border fence.

Teenagers threw Molotov cocktails and fired stones from sling shots but were so far away that they could impossibly reach the fence. Tires have been set on fire and rolled towards the border. What the Israeli military claimed to be an attack on its security infrastructure must be understood from the Palestinian point of view as a smokescreen to protect them from Israeli sharpshooters.

The Israeli military then fired tear gas grenades at the demonstrators. Occasional artillery and even tank fire were reported, and snipers positioned around the fence opened fire.

March 30 was a massacre

At the end of the day, 17 Palestinians were killed. The Israeli military claims it fired exclusively at the “main instigators” of the protests but identifies only ten of the dead as members of terrorist groups, while Hamas stated that five of the dead were part of their armed wing.

Among the dead were teenagers and men who undoubtedly belonged to no armed organization. A farmer was killed by artillery fire while working on his field. An unarmed youngster was killed while smoking a cigarette by a shot to his head. “There is no future for the youth, it was destroyed, they wanted just a better life. Unfortunately there is no better life but for dead people,” the father of the slain teenager describes the desperate situation in Gaza.

Human Rights Watch cites figures from the Ministry of Health in Gaza City, which claims that 1,415 people were injured, 758 of whom by live ammunition. Most of the others were injured by rubber bullets and tear gas.

Just two days before the massacre, Gadi Eizenkot, the Israeli military’s supreme commander, announced he had “deployed more than 100 sharpshooters” to the Gaza border and explicitly gave them a shoot-to-kill order if individuals approached the border fence. The following day, Prime Minister Benyamin Netanyahu’s office posted on Twitter a video of an unarmed, motionless Palestinian shot in the leg with the caption in Arabic, “This is the least that anyone who tries to cross the security fence between Gaza and Israel will face.” Hence, by no means we can talk of a spontaneous reaction by the Israeli snipers, but rather of intended action.

The “more than 100 sharpshooters” finally made the threats of their superiors come true. Videos spread like wildfire on the internet, showing a group of youngsters shot while praying, an empty-handed man being shot walking toward the border, several teenagers shot while lying on the ground, a woman shot while waiving a Palestinian flag, a juvenile shot in the back running in the opposite direction of the border fence, or a famous soccer player shot in the knee while standing isolated filming himself.

The day after, the Israeli military tweeted: 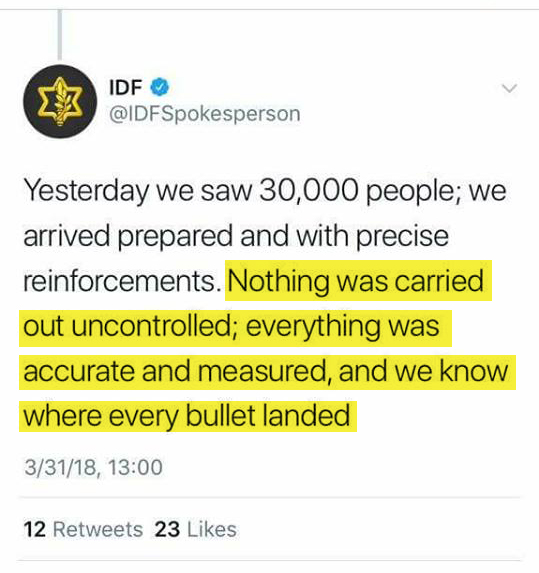 In the days following “Land Day”, another man was shot dead, one was killed by an Israeli drone, and one succumbed to his injuries in the hospital, raising the number of deaths in the first week of protest to 20. The following weeks, thousands of Palestinians gathered on every consecutive Friday for protests, and the Israeli army continued to shoot live ammunition at them.

After five weeks of protest, the death toll rose to 45 people, with more than 6,000 wounded. Among the dead were two Palestinian journalists who were killed despite wearing blue flak jackets marked with the word “press”. Many more journalists were shot at. The ongoing violence prompted Amnesty International to call for governments worldwide to impose an arms embargo on Israel.

“The time for symbolic statements of condemnation is now over”, the statement reads. “The international community must act concretely and stop the delivery of arms and military equipment to Israel.”

An Israeli sniper filmed himself shooting a Palestinian protester inside the occupied Gaza Strip, as he & other soldiers celebrate.

A while ago, I met with a former Israeli soldier in a pub in Tel Aviv. All night long, we talked about the Gaza war in the summer of 2014 and the ground offensive that he was a part of. He says he shot at least nine people dead, possibly as many as 20. He could not say for certain of even a single individual if they were combatants or civilians. But in truth, this distinction actually does not exist, because by electing Hamas in 2006, Gazans are guilty and became a legitimate target is a whole, the ex-soldier justified his obvious fair game-mentality.

Given the dead civilians on “Land Day”, the hundreds of people injured by live ammunition and the many videos documenting the shooting of unarmed people, the Israeli government’s assertion that the snipers are exclusively targeting terrorists is simply grotesque:

On March 30, 2018, the Israeli military carried out a massacre in Gaza. 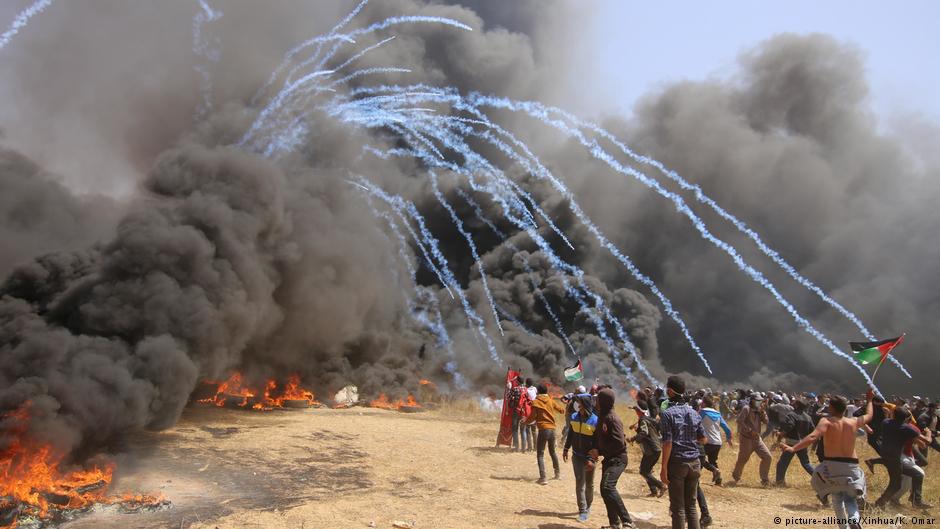 Gazans burn tires in order to create a smoke screen that protects them from Israeli snipers. By Tahyamisr.net.

“The most moral army in the world”

Although the Israeli military initially claimed to have responded to gunfire from demonstrators, Human Rights Watch said it “could find no evidence of any protester using firearms”. Nor did the demonstrators posed an imminent threat to the Israeli security forces, making the use of live ammunition on unarmed demonstrators “unlawful”, the renowned NGO concluded.

EU foreign policy chief Federica Mogherini and UN Secretary-General António Guterres called for an investigation into the events of 30 March. Israeli Defense Minister Avigdor Lieberman – who proposed in 2015 what to do with all disloyal Arabs: “pick up an ax and cut off his head” – categorically ruled out internal investigations and denied any cooperation in independent investigations by international bodies. Rather in an interview with the Israeli Army Radio, he justified the killings saying the Israeli military “did what had to be done”, adding “I think that all of our troops deserve a medal.” Prime Minister Netanyahu for his part brought up the notorious cliché of the Israeli military being “the most moral army in the world”.

It is this ignorance of the war hawks within the Netanyahu government – the most right-wing extremist government in the country’s history – and their historically established certainty of total impunity that is the recipe for new killings and new wars.

Gaza needs borders open for people and goods, and it needs the fundamental right to self-determination. Only in this way, a degree of reconstruction and economic development can be achieved, which relieves pressure from this explosive powder keg.

On the contrary, a new wave of violence, the Third Intifada, or Israel’s next bombing onslaught could finally bring about Gaza’s collapse.

This piece was originally published in German on NachDenkSeiten. It was translated to English by Jakob Reimann and edited by the staff of the Australian website newmatilda where it first appeared.

You like the article? Then please support our work by telling friends, family, and foes about this article
or follow JusticeNow! on