The US has deployed 240,000 troops in 172 countries around the world – a sprawling global network which serves as a permanent gesture of threat towards every country which dares to substantially resist Washington.

On October 4, four US Special Forces soldiers died in clashes in the West African country of Niger during a routine reconnaissance mission near the border with Mali. While hobby pastor Donald Trump turned via telephone to the mourning widow of one of the four killed soldiers with the empathetic words “He knew what he signed up for”, most Americans probably wondered where Niger was located in the first place (and in case they are no geography nerds like the author, they are forgiven). The second and even more glaring question, I assume, was the following: “What the hell are we doing in Niger?” Most Americans were probably also more than surprised to find out that the US has deployed a total of 800 soldiers in the Nigerian desert.

The rank and file of the US Empire

The uproar about the dead from Niger sparked a debate on the global US military presence, which quickly showed that the hundreds of troops in Niger are just the tip of the iceberg and pale against the global contingent. On the Pentagon website, there is a quarterly updated Excel chart that meticulously lists all troop deployments. In the process, it brings to light astonishing facts:

The US has deployed a total of 240,000 troops in at least 172 countries around the world. As a reminder, there are only 194 countries on the globe (193 UN members plus Palestine), so in 89 percent of these countries, the US military has a presence.

If we want to remember one important number in 2017, it certainly is this: 172 countries.

The list is led by Japan with 39,980 troops spread across a hefty number of 84 US military bases. As part of the more than 130,000 troops of the US Pacific Fleet, “the Japanese” are thus the spearhead of the world war against China – the global Sword of Damocles in the coming years and decades.

The US Pacific Fleet, with its more than 130,000 troops, is the spearhead of a potential confrontation with China. Here you see 42 ships and submarines during the RIMPAC exercise in 2014. By U.S. Pacific Fleet, Flickr, licensed under CC BY-NC 2.0 (edited).

The Second country on the list is Germany with 36,034 troops stationed in 38 US military bases. And that is 72 years after the end of World War II and 27 years after German reunification.

In total there are 19 countries on this globe with at least 1,000 US troops stationed. In addition to Afghanistan and Iraq, harboring together 19,567 troops, the repressive and partly fascist oil dictatorships of the Gulf region are mainly among these. With Italy, the UK, Spain and even Austria, as well as dozens of smaller country contingents, tens of thousands of US soldiers are stationed all over Europe as well, with their headquarters in Stuttgart, Germany.

After Japan, the actual second place (and when adding deployed civilian Pentagon staff even by far taking first place) goes to a rather unexpected “country”: UNKNOWN. What exactly lies behind these 51,490 ghosts, we can all fantasize about ourselves. I suspect that they are special Special Forces operating outside of the regular mechanisms and protocols, perhaps infiltrated into high cadres in Iran or hiding somewhere in the forests around Moscow. Or to use the loving words of the German Interior Secretary Thomas de Maizière: Part of these answers would unsettle the population.

The US Empire is the most powerful empire in human history. But it is inevitably going to crumble in the decades to come. In the medium term, China will overtake the US in all areas – economy, trade, finance, technology, spaceflight, top-level research, politics, diplomacy, development aid, infrastructure – or has already done so, as in the field of global trade. Only in the area of culture, there is no end in sight for global US dominance. China is simply “uncool” – as Foreign Policy’s George Gao put it. 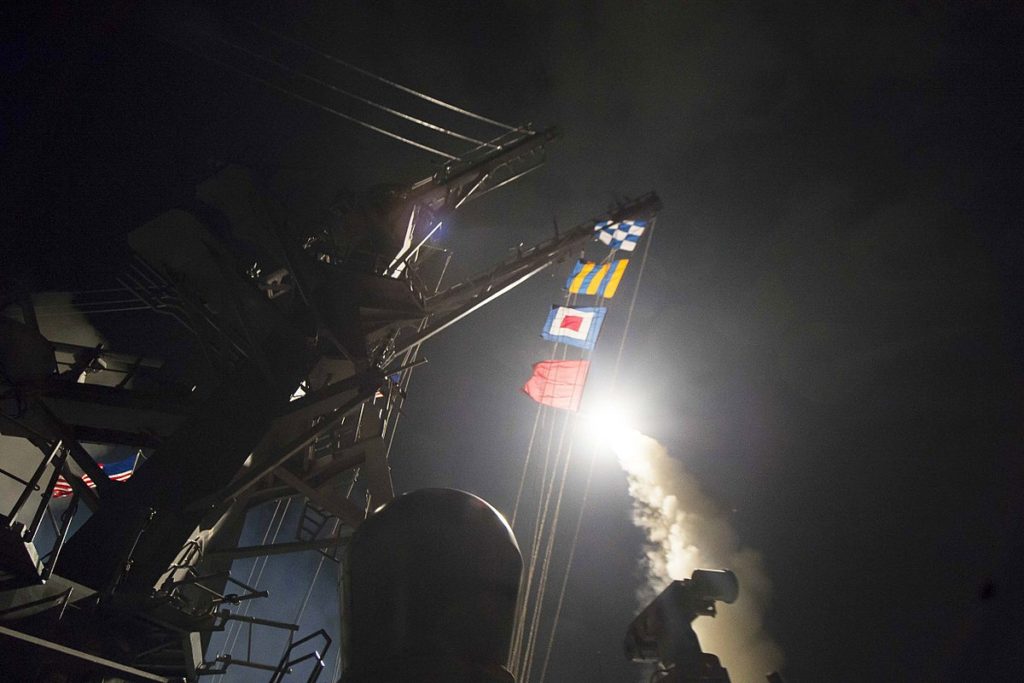 After Donald Trump fired 59 Tomahawk missiles on the Shayrat Airbase in Syria on April 7th, he still remembered every detail of the chocolate cake he ate together with China’s President Xi while commanding the strikes, but he thought he had just bombed the Iraq, not Syria. By U.S. Navy, Robert S. Price, Wikimedia Commons, published under public domain.

Basically, the current US supremacy is sustained by a single pillar: its military. And thus, by the daunting, unwavering willingness demonstrated over the last 100 years to not only threaten with military retaliation, but to use it against every country which dares to substantially resist Washington. Whether big or small, poor or rich, ally or enemy, it plays no role here.

With the attacks of September 11, the subsequent proclamation of the Axis of Evil, and the beginning of the Global War on Terror, we entered a new age. Just as there is a time before and after Christ, there seems to be an era before and after 9/11.

It is the age of the endless war. Endless, not only because it is unlimited in time, but also because its effect permanently recreates its cause and thus it keeps itself alive. A self-fulfilling prophecy: In 2000, worldwide a total of 405 people were killed by terror attacks. In 2014 that number escalated to no less than 32,727 killed, an 81-fold increase in 14 years of supposed war on terror. Endless, moreover, because it is by definition impossible to end it victoriously. There has always been and will always be terrorism, at least as long as there is no change in the basic mechanisms of how living together in this world is organized.

But the US as a patron saint of this ideology is doing everything in their power to ensure we keep chasing this phantom. They are blundering into one deceptively so-called anti-terror war after the other. From classic invasions, such as in Iraq and Afghanistan, via air warfare such as in Libya and the IS territories, through to shadow warfare under the radar of the public, as in the Philippines or West Africa, with Yemen, Syria, Somalia, Pakistan somewhere in between these limit values. Or with (still) merely cyber warfare as in Iran or North Korea.

The appropriate war model is imposed on each country – and 240,000 soldiers in 172 countries will ensure that every country in the world can easily be next in line. A sprawling global network without democratic control or debate serves as a permanent threatening gesture towards potential adversaries.

With a mentally ill, hate-filled, ultranationalistic, all-militaristic and megalomaniac narcissist for four or even eight years in the White House, it is certainly hard to imagine a non-bloody scenario for the 21st Century, which is the scenario of a shrunken giant that landed with only a few bruises and a few broken ribs on an equal footing in the multipolar world.

With Donald Trump, dropping the Mother of All Bombs, not even knowing which country he has just bombed, sadly, it is easier to imagine a global fireball. But the hope of an end to war as a political tool is palpable everywhere. It is in the reason of the US population, and in that of all other countries in the world. It is in the peaceable minds of the billions of people on this globe.

It is in the protest of these people against their political leaders.

This article is the translation of Jakob’s German piece that appeared here on JusticeNow!. The English version was created in collaboration with Chris Graham, publisher and editor of the left-wing Australian website New Matilda where the English piece appeared first. JusticeNow! sends the best wishes to Chris to Australia and the whole New Matilda staff and says THANK YOU to everyone involved for their great job – connect critical journalism worldwide!