While Muslims knelt in prayer for Orlando, Donald Trump was urging his followers to reach for their guns. ISIS and Donald Trump live in a symbiotic relationship. They nurture each other. The hate of one side strengthens the other.

A guest article by Peter Certo.

As the sun set over New York on June 12, hundreds of Muslims gathered in Hudson River Park to break their Ramadan fast together. Iftar, the evening Ramadan meal, is often a joyous celebration of faith and family. But the mood that Sunday was solemn: That morning, news had broken of the ghastly massacre of LGBTQ revelers at Pulse nightclub in Orlando. 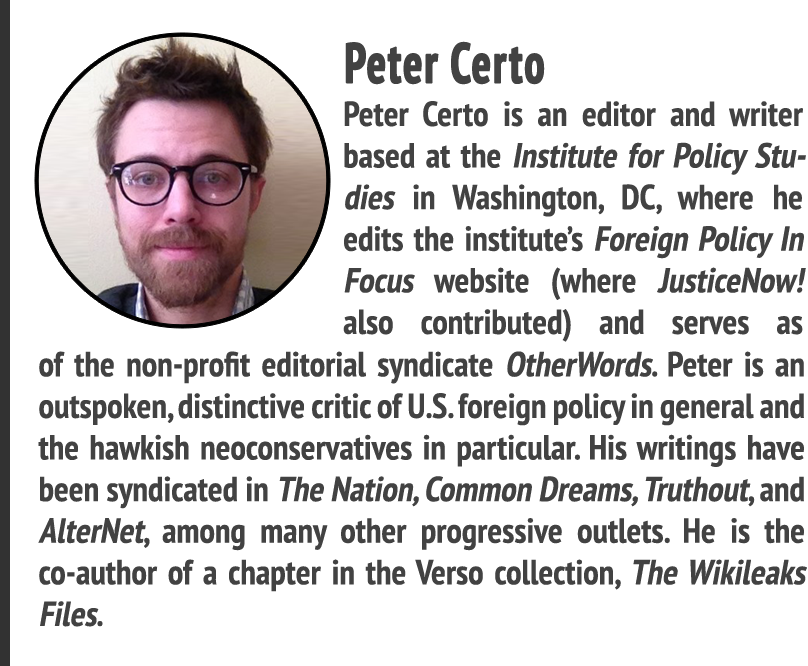 A lone Muslim had allegedly perpetrated the attack. Here by the Hudson, over 200 knelt in prayer. “We’re praying for those who were lost,” one woman explained in a video circulated by the Huffington Post, her voice breaking. “As Muslims, we’re united in our outrage over this senseless act of violence.”

Meanwhile, an Orlando imam condemned terrorism as un-Islamic and affirmed his belief that “Islam teaches peace.” The Florida chapter of a national Muslim group called on members to donate blood for the victims. And statements of sympathy tumbled forth from American Muslims in what CBS News called “an avalanche.”

“Today, we stand in solidarity with the LGBTQ community,” said the group Muslim Advocates. “Your grief is our grief. Your outrage is our outrage.”

Unfortunately, none of those touching gestures deterred Donald Trump from warning darkly that “radical Islam is coming to our shores.” In a falsehood-riddled speech following the Orlando massacre, the presumptive GOP nominee blamed the shooting on immigration and “political correctness.”

As Muslims all over America sent their sympathies to Orlando, Trump mocked his Democratic rival’s insistence that “Muslims are peaceful and tolerant people.” He accused Muslims of causing “death and destruction” by covering up terrorism in their midst (though it was later revealed that a Muslim member of Mateen’s community had reported him as suspicious).

Then, in perhaps the most ominous part of the address, Trump claimed that Democrats will “take away Americans’ guns and then admit the very people who want to slaughter us.” Muslim immigrants are the problem, he seems to be saying. And guns are the solution.

If you ask me, I’d feel much safer with the crowd at Hudson River Park than anywhere near a rally of armed Trump supporters.

But here’s the creepier part: For all his blathering that “we have to get smart” about “radical Islam,” Trump is stupidly playing right into ISIS’s hands. Like Trump himself, the group benefits immensely from anything that drives a wedge between Muslims and the societies they live in. 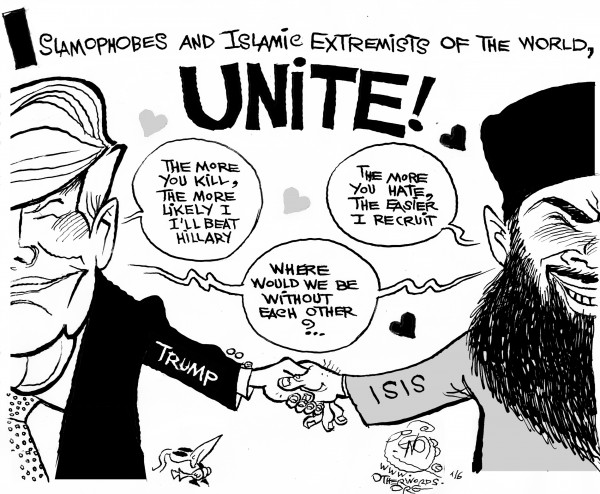 ISIS said as much itself — in plain English — in a publication detailing its plan to “destroy the gray zone” between infidels and believers. Since most Muslims seem to like living in the liberal societies of Europe and North America, ISIS propagandists have written, the only way to drive up recruitment is to make Muslims feel unwelcome there.

No wonder ISIS recruiters are now featuring Donald Trump in advertisements. It’s not because they’re afraid of him — it’s because few people are working harder to make Muslims feel unwelcome than he is. Civil rights groups report that Trump’s rise has paralleled a shocking increase in hate crimes against Muslims in this country.

In fact, the United States has arguably the most prosperous, well-integrated Muslim population in the western world. Even as ISIS has scored a few recruiting successes among the much more marginalized Muslim communities of Europe — though even there the group falls way outside the mainstream — it’s flat-lined here.

Scenes like the iftar gathering in New York, in other words, are the rule, not the exception. They’re a touching rejoinder to the toxic politics of division, and a far more accurate reflection of our Muslim neighbors than anything peddled by Trump.

And, not least, they’re a much better asset in the fight against terrorism than any bullet or bomb — or any demagogue who urges his followers to reach for their guns at the first sign of trouble.

JusticeNow! sends a big THANK YOU and the best wishes to Peter Certo who published this piece on Foreign Policy In Focus and to Khalil Bendib who drew the cartoon “Radical Haters Unite” for otherwords.org. Translated by JusticeNow! – connect critical journalism worldwide!

Peter is the editor of Foreign Policy In Focus.