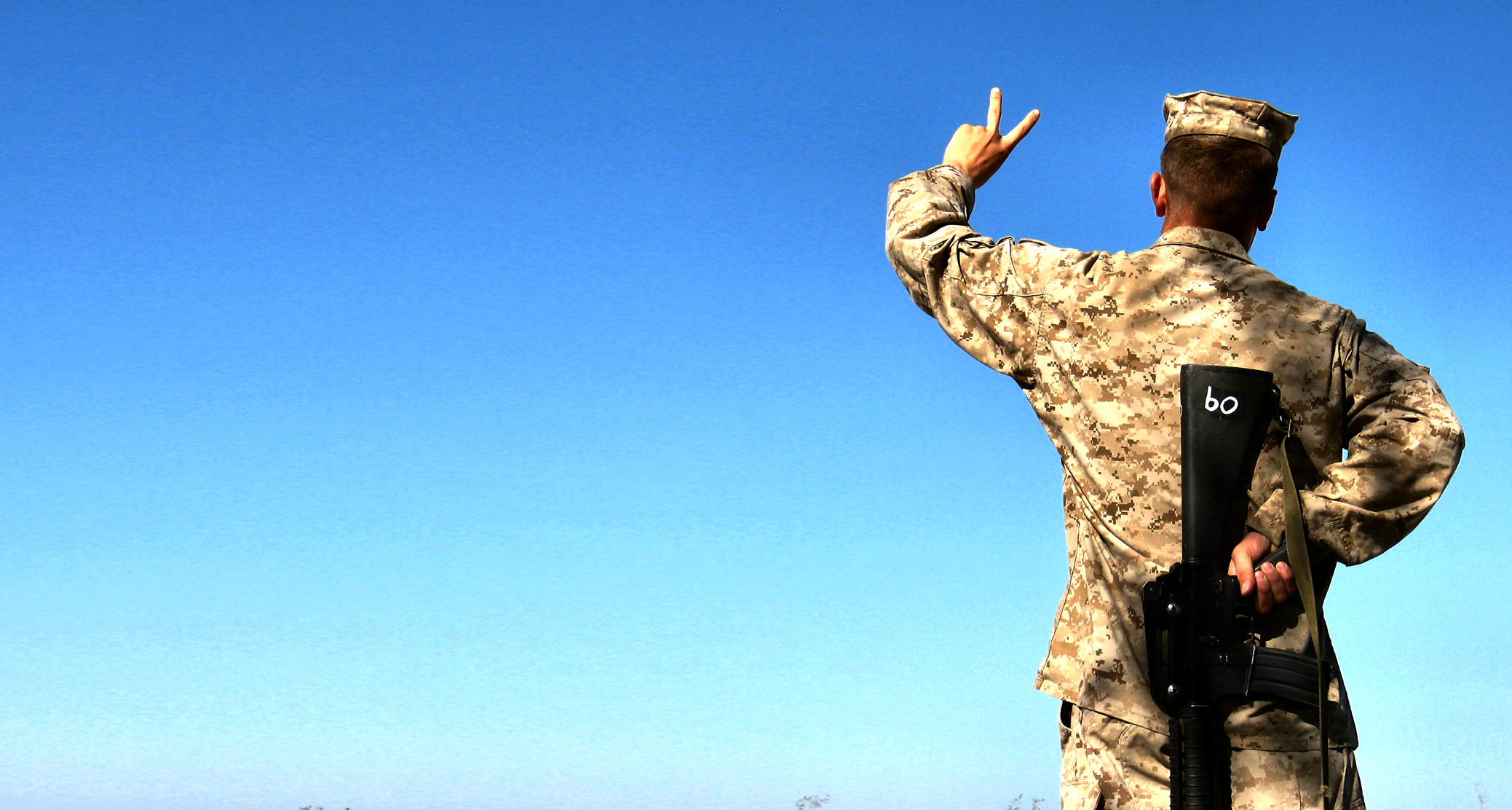 Silencing America As It Prepares For War: John Pilger
John Pilger on the belligerence of the US and the desolate shape of its democracy

The United States is focussed on a racist Republican presidential candidate, while those in power – and those seeking it – prepare for war, writes John Pilger.

JusticeNow! sends best regards and a big Thank You! to Australia,
to John Pilger and New Matilda where this article first appeared.

Returning to the United States in an election year, I am struck by the silence. I have covered four presidential campaigns, starting with 1968; I was with Robert Kennedy when he was shot and I saw his assassin, preparing to kill him. It was a baptism in the American way, along with the salivating violence of the Chicago police at the Democratic Party’s rigged convention.

The great counter revolution had begun. 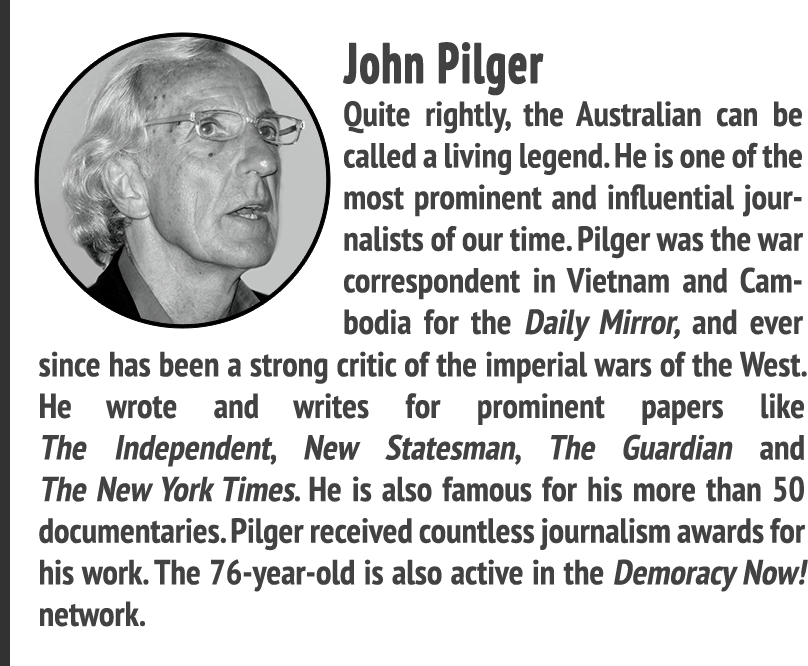 The first to be assassinated that year, Martin Luther King, had dared link the suffering of African-Americans and the people of Vietnam. When Janis Joplin sang, “Freedom’s just another word for nothing left to lose”, she spoke perhaps unconsciously for millions of America’s victims in faraway places.

“We lost 58,000 young soldiers in Vietnam, and they died defending your freedom. Now don’t you forget it.”

So said a National Parks Service guide as I filmed last week at the Lincoln Memorial in Washington. He was addressing a school party of young teenagers in bright orange T-shirts. As if by rote, he inverted the truth about Vietnam into an unchallenged lie.

The millions of Vietnamese who died and were maimed and poisoned and dispossessed by the American invasion have no historical place in young minds, not to mention the estimated 60,000 veterans who took their own lives. A friend of mine, a marine who became a paraplegic in Vietnam, was often asked, “Which side did you fight on?”

A few years ago, I attended a popular exhibition called “The Price of Freedom” at the venerable Smithsonian Institution in Washington. The lines of ordinary people, mostly children shuffling through a Santa’s grotto of revisionism, were dispensed a variety of lies: the atomic bombing of Hiroshima and Nagasaki saved “a million lives”; Iraq was “liberated [by]air strikes of unprecedented precision”.

The theme was unerringly heroic: only Americans pay the price of freedom.

The 2016 election campaign is remarkable not only for the rise of Donald Trump and Bernie Sanders, but also for the resilience of an enduring silence about a murderous self-bestowed divinity. A third of the members of the United Nations have felt Washington’s boot, overturning governments, subverting democracy, imposing blockades and boycotts. Most of the presidents responsible have been liberal – Truman, Kennedy, Johnson, Carter, Clinton, Obama.

Pinter expressed a mock admiration for what he called “a quite clinical manipulation of power worldwide while masquerading as a force for universal good. It’s a brilliant, even witty, highly successful act of hypnosis.”

Take Obama. As he prepares to leave office, the fawning has begun all over again. He is “cool”. One of the more violent presidents, Obama gave full reign to the Pentagon war-making apparatus of his discredited predecessor. He prosecuted more whistleblowers – truth-tellers – than any president. He pronounced Chelsea Manning guilty before she was tried. 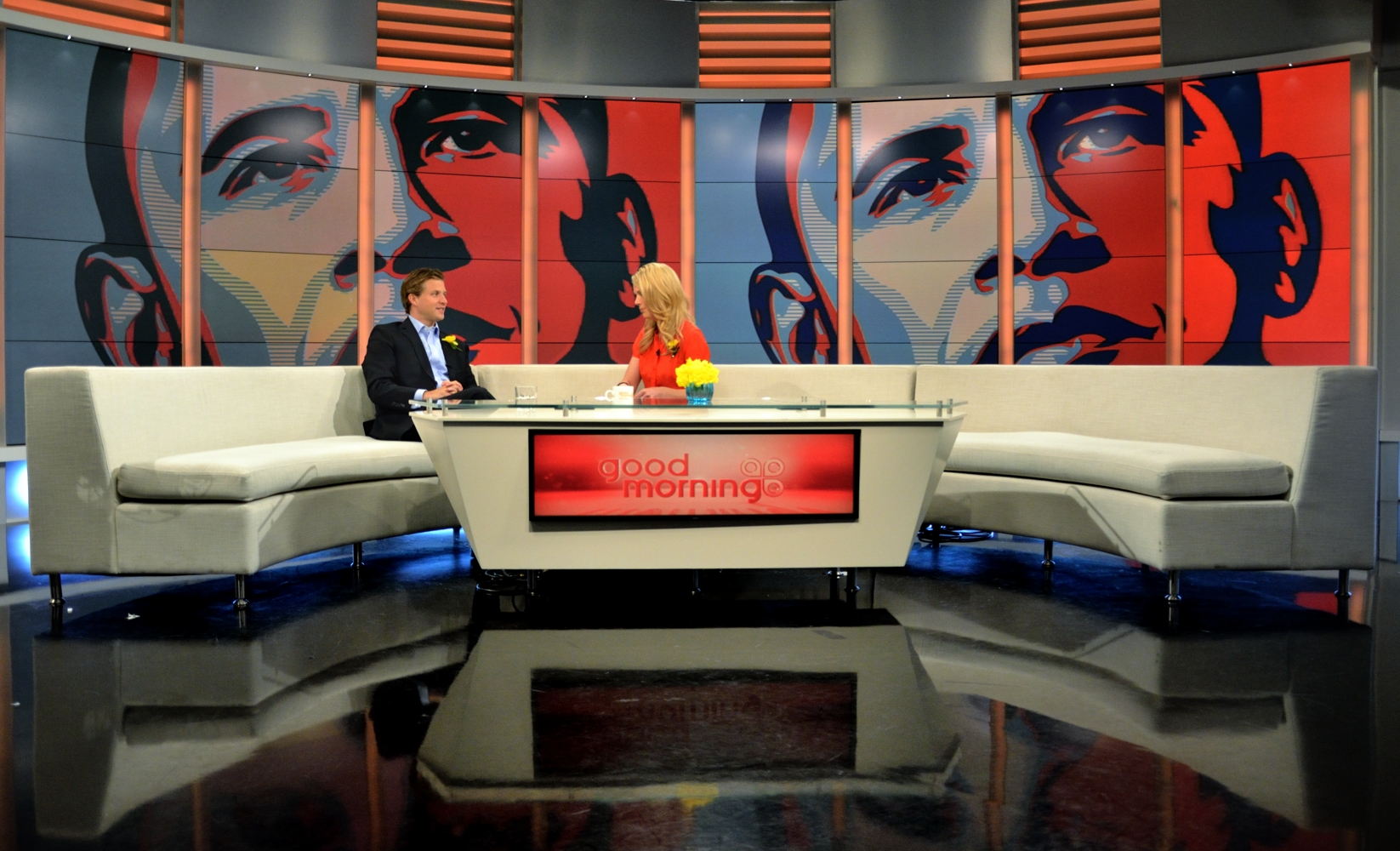 Barack Obama is a pop star, a caricature of his former self. Das, wofür er steht, steht seinem Handeln diametral gegenüber. By US Embassy,  licensed under CC BY-ND 2.0.

Today, Obama runs an unprecedented worldwide campaign of terrorism and murder by drone.

In 2009, Obama promised to help “rid the world of nuclear weapons” and was awarded the Nobel Peace Prize. No American president has built more nuclear warheads than Obama. He is “modernising” America’s doomsday arsenal, including a new “mini” nuclear weapon, whose size and “smart” technology, says a leading general, ensure its use is “no longer unthinkable”. 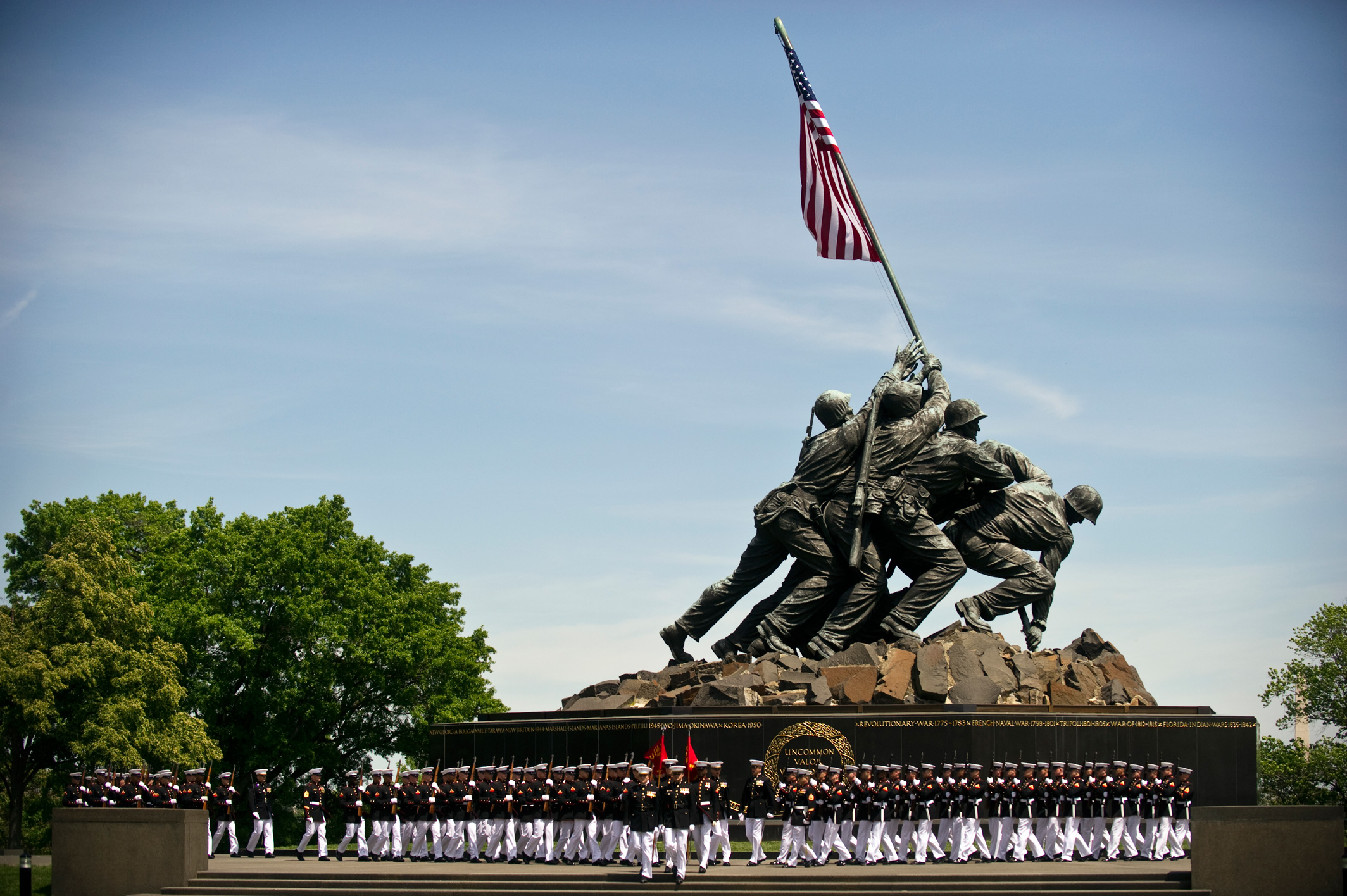 “Raising the Flag on Iwo Jima”: 1945, during the Battle of Iwo Jima (against Japan), six US soldiers raise the US flag on the southern hills of the island. The orignal photo is considered quite possibly the most reproduced photograph of all time. It served as the template for the Marine Corps War Memorial in Rosslyn, Virginia that is shown here. By public domain.

James Bradley, the best-selling author of Flags of Our Fathers and son of one of the US marines who raised the flag on Iwo Jima, said, “[One] great myth we’re seeing play out is that of Obama as some kind of peaceful guy who’s trying to get rid of nuclear weapons. He’s the biggest nuclear warrior there is. He’s committed us to a ruinous course of spending a trillion dollars on more nuclear weapons. Somehow, people live in this fantasy that because he gives vague news conferences and speeches and feel-good photo-ops that somehow that’s attached to actual policy. It isn’t.”

On Obama’s watch, a second cold war is under way. The Russian president is a pantomime villain; the Chinese are not yet back to their sinister pig-tailed caricature – when all Chinese were banned from the United States – but the media warriors are working on it.

Neither Hillary Clinton nor Bernie Sanders has mentioned any of this. There is no risk and no danger for the United States and all of us. For them, the greatest military build-up on the borders of Russia since World War Two has not happened. On May 11, Romania went “live” with a Nato “missile defence” base that aims its first-strike American missiles at the heart of Russia, the world’s second nuclear power.

In Asia, the Pentagon is sending ships, planes and Special Forces to the Philippines to threaten China. The US already encircles China with hundreds of military bases that curve in an arc up from Australia, to Asia and across to Afghanistan. Obama calls this a “pivot”. 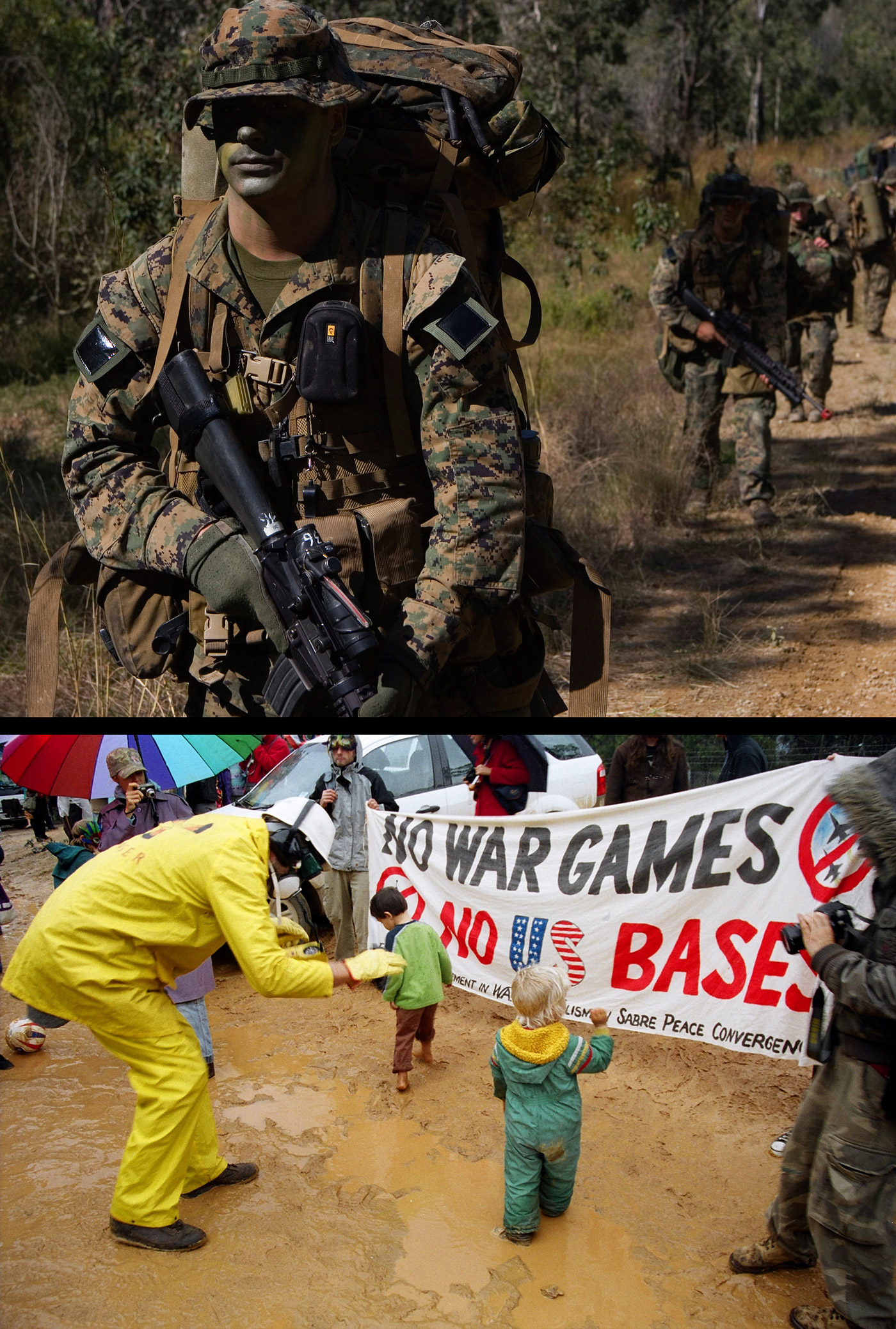 US marines during the bilateral training mission Talisman Saber between the US and the Australian military …and protests against it. By public domain.

As a direct consequence, China reportedly has changed its nuclear weapons policy from no-first-use to high alert, and put to sea submarines with nuclear weapons. The escalator is quickening.

It was Hillary Clinton who, as Secretary of State in 2010, elevated the competing territorial claims for rocks and reef in the South China Sea to an international issue; CNN and BBC hysteria followed; China was building airstrips on the disputed islands.

In its mammoth war game with Australia in 2015, Operation Talisman Sabre, the US practiced “choking” the Straits of Malacca through which pass most of China’s oil and trade. This was not news.

Clinton declared that America had a “national interest” in these Asian waters. The Philippines and Vietnam were encouraged and bribed to pursue their claims and old enmities against China. In America, people are being primed to see any Chinese defensive position as offensive, and so the ground is laid for rapid escalation.

A similar strategy of provocation and propaganda is applied to Russia.

Clinton, the “women’s candidate”, leaves a trail of bloody coups: in Honduras, in Libya (plus the murder of the Libyan president) and Ukraine. The latter is now a CIA theme park swarming with Nazis and the frontline of a beckoning war with Russia.

It was through Ukraine – literally, borderland – that Hitler’s Nazis invaded the Soviet Union, which lost 27 million people. This epic catastrophe remains a presence in Russia. Clinton’s presidential campaign has received money from all but one of the world’s 10 biggest arms companies. No other candidate comes close.

Hillary Clinton, the “women’s candidate”, like Obama stands for „big change“. As if in the 21st century, a woman as head of state was anything special.

Sanders, the hope of many young Americans, is not very different from Clinton in his proprietorial view of the world beyond the United States. He backed Bill Clinton’s illegal bombing of Serbia. He supports Obama’s terrorism by drone, the provocation of Russia and the return of special forces (death squads) to Iraq.

He has nothing to say on the drumbeat of threats to China and the accelerating risk of nuclear war. He agrees that Edward Snowden should stand trial and he calls Hugo Chavez – like him, a social democrat – “a dead communist dictator”. He promises to support Clinton if she is nominated.

The election of Trump or Clinton is the old illusion of choice that is no choice: two sides of the same coin. In scapegoating minorities and promising to “make America great again”, Trump is a far right-wing domestic populist; yet the danger of Clinton may be more lethal for the world.

“Only Donald Trump has said anything meaningful and critical of US foreign policy,” wrote Stephen Cohen, emeritus professor of Russian History at Princeton and NYU, one of the few Russia experts in the United States to speak out about the risk of war.

The election of Trump or Clinton is the old illusion of choice that is no choice: two sides of the same coin.

In a radio broadcast, Cohen referred to critical questions Trump alone had raised. Among them: why is the United States “everywhere on the globe”? What is NATO’s true mission? Why does the US always pursue regime change in Iraq, Syria, Libya, Ukraine? Why does Washington treat Russia and Vladimir Putin as an enemy?

The hysteria in the liberal media over Trump serves an illusion of “free and open debate” and “democracy at work”. His views on immigrants and Muslims are grotesque, yet the deporter-in-chief of vulnerable people from America is not Trump but Obama, whose betrayal of people of colour is his legacy: such as the warehousing of a mostly black prison population, now more numerous than Stalin’s gulag.

This presidential campaign may not be about populism but American liberalism, an ideology that sees itself as modern and therefore superior and the one true way. Those on its right wing bear a likeness to 19th century Christian imperialists, with a God-given duty to convert or co-opt or conquer.

In Britain, this is Blairism. The Christian war criminal Tony Blair got away with his secret preparation for the invasion of Iraq largely because the liberal political class and media fell for his “cool Britannia”.

In the Guardian, the applause was deafening; he was called “mystical”. A distraction known as identity politics, imported from the United States, rested easily in his care.

History was declared over, class was abolished and gender promoted as feminism; lots of women became New Labour MPs. They voted on the first day of Parliament to cut the benefits of single parents, mostly women, as instructed. A majority voted for an invasion that produced 700,000 Iraqi widows.

The equivalent in the US are the politically correct warmongers on the New York Times, the Washington Post and network TV who dominate political debate.

I watched a furious debate on CNN about Trump’s infidelities. It was clear, they said, a man like that could not be trusted in the White House.

No issues were raised. Nothing on the 80 per cent of Americans whose income has collapsed to 1970s levels. Nothing on the drift to war. The received wisdom seems to be “hold your nose” and vote for Clinton: anyone but Trump.

That way, you stop the monster and preserve a system gagging for another war. 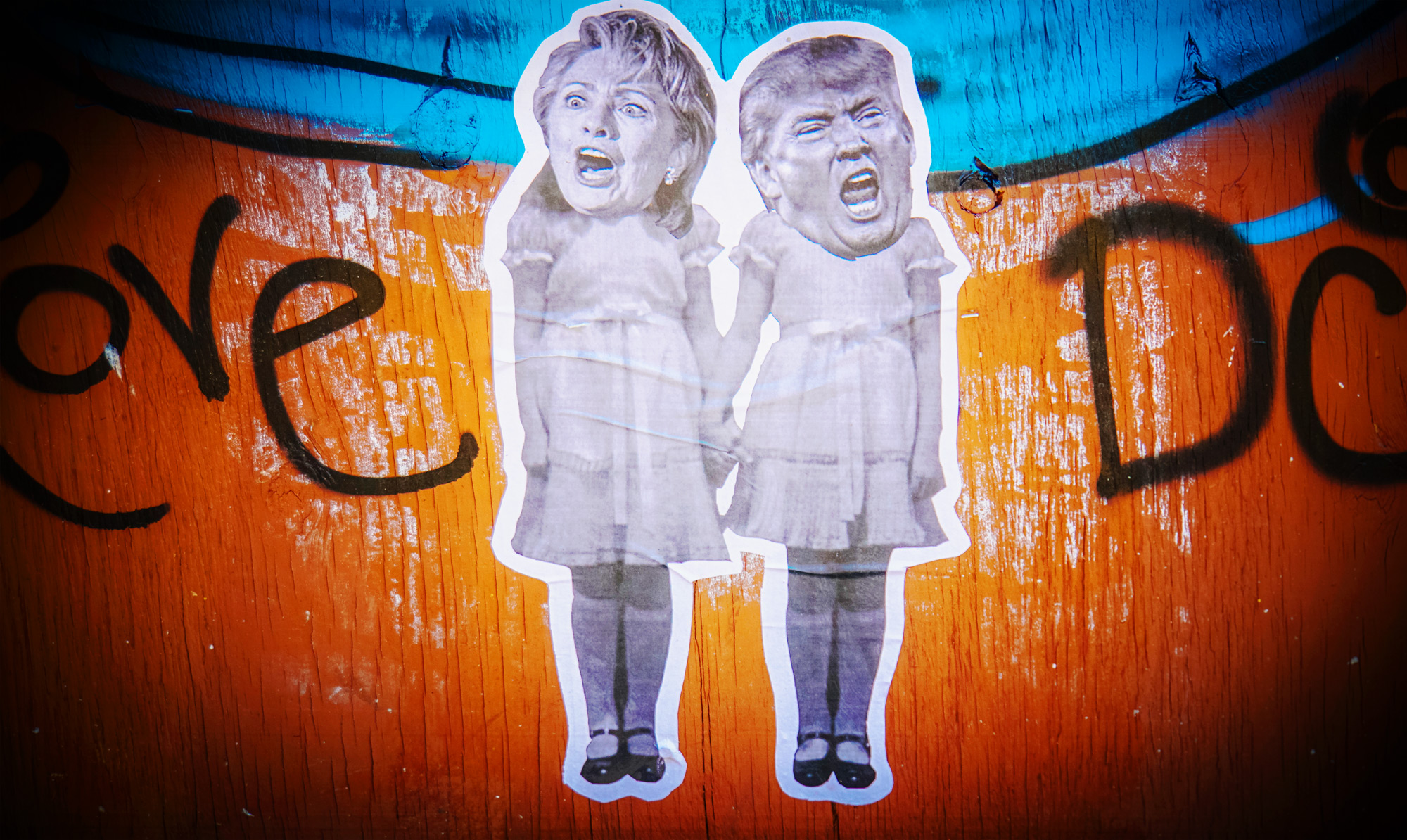 „The election of Trump or Clinton is the old illusion of choice that is no choice: two sides of the same coin,“ writes John Pilger. By Ted Eytan, licensed under CC BY-SA 2.0 (edited).

JusticeNow! sends best regards and a big Thank You! to Australia, to John Pilger and New Matilda where this article first appeared – connect critical journalism worldwide!

Title image by Jayel Aheram, licensed under CC BY 2.0.